• Web 2.0 is redefining what and how and with whom we learn.

• Wikis- for collaboration and here.

• Research on differences in games and simulations-

• Why Web 2.0 is about-more than technology-

• The LMS as a trap? Considering Online Pedagogy-

• Second life pros and cons
Posted by Anthony at 1:27 PM No comments:

It seems like 1300 years since I last blogged on the Chronicles. I will have to see Prince Caspian again, as I have an unsettled view of the film at this point. The effects were good, and the storyline was mainly consistent with the original.

Where it departs for me is the presence of a grand theme of essense versus presence. What something is, overriding what something is made of. The theme of mythos is underplayed in the movie for a different vision of grand battle scenes we have seen the like of before. It is like the director thought that the "deep magic" would be too deep for the audience. There is no hint of substantive mythological content- no Bacchus to dance with. More disturbing, there is very little sign of Aslan to dance with.Myth becomes fact but there seems to be little longing for it.

And Susan sure killed a bunch of Telmarines with that bow- wonder what Lewis would have thought of that? Apparently Doug Gresham didn't think much of it.

Here is a significant quote from the CT movie review that is very instructive.

"In the film, Aslan tells Lucy, "Every year you grow, so shall I." In the book, Aslan says, "Every year you grow, you will find me bigger." Is this a significant change? In another scene, the film version of Aslan tells Lucy, "We can never know what would have happened." In the book, he says, "Nobody is ever told that." Is this a significant change? Do changes like these affect our understanding of Aslan's divinity? If so, how? If not, why not?"
Posted by Anthony at 10:46 AM No comments:

We won not one but two awards for our Online Courses...
Posted by Anthony at 4:13 PM No comments:

Scobelizer- read 4 yerself. Especially the entry on Microsoft versus the Web...
Posted by Anthony at 1:36 PM No comments:

Christian Higher Education- what is it?

Dr. Pettegrew says: "James Davison Hunter in his well known book "Evangelicalism: The Coming Generation" (published in 1987), suggests that "Somehow, exposure to the realm of higher education weakened the grip of religious conviction over a person's life. Thus whatever religious beliefs and practices an individual carried in with him at the start of his educational sojourn would have either been seriously compromised or abandoned altogether by the time he was ready to graduate. Minimally holding on to the religion of his adolescence would have proven difficult if not impossible" (171). He suggests that this is true not only in secular education but also Christian higher education in Christial liberal arts colleges. In fact, other studies have suggested that Christian students may do less well in Christian colleges, compared to secular colleges, because of a kind of "hothouse" effect at the Christian college, that the students become lethargic and apathetic about their faith."

I believe the above statements Dr. Pettegrew quoted are reflective of facts- a correct analysis. The underlying issue is the nature of faith- whether it is born of the Spirit or of indoctrination. It is a larger issue and has a prior genesis than that of beign accepted at a Christian Liberal Arts college. Of course, I am not alone in this crisis assessment. Much of what passes for Christianity is of this cultural untested variety that has learned to affirm that it is “all of God” but in fact is admixed with self-centered man. There is a simple reason why Christian are indistinguishable from the world in the west. They are in it and of it, not living practically with the ramifications of who they are, not even thinking in terms of all Truth being God’s Truth. Lukewarmness and laissez-faire religion ensues at best; the churches become unregenerate at worst...

In answering the second portion, I must allude to the words of my former pastor, Duane Litfin, whom I am deeply indebted to: The raison d’etre of the Christian college is see more fully the One we serve and to understand more clearly our own identity before Him and to provide an education where Jesus is the center and source of all knowledge. With Christ as the source, the Christian college must by virtue of its curriculum strengthen the foundations of Christian thought- to abrogate what David Wells called the Scandal of the Evangelical Mind. The revelatory nature of Truth demands that Christian education not only preserve Truth, but extend its application (and redemptive agency) to the uttermost disciplines. In my mind, this is an area of the Great Commission that has largely been ignored by the body of Christ, and yet it is where a substantial part of the battle is won or lost. We must equip students to take their faith to the public forums and not only stand, but to tear down every argument and every arrogant obstacle raised up against the knowledge of God and take every thought captive to make it obey Christ. We have along way to go and our existing strategies are not working as effectively as required for the task.

Thus, the key to the redemptive task is to understand and pursue the integrative mandate. Kingdom extension must be holistic and integrative of the whole man, lest the faith become just another compartment; this is how we got to where we are today. I believe a centerpiece of the curriculum must become teaching the strategic planning for advancing Kingdom initiatives in every discipline. For this to happen, it has to flow from the curriculum; teachers must see this as a mandate for themselves and for their students. Kingdom extension should be viewed as an outworking of our conformation to Christ, who is the Lord of All. What I am speaking of moves beyond Theodicy or Reconstructionism, it is the air we breath. We must teach students to think integratively: what can I do in this monent, in this week, in this lifetime to extend the Kingdom of my Lord in my dauily work and walk?

To “prevent it from happening” is not the issue- the primary task we must attack is to verify and validate the faith students enter with- true faith is living and can not be extinguished. We must “stir up the spark” the gift God bestows, and educate students in the deliberately designed passionate pursuit of exalting God in ALL things. The sanctification and consecration of a kingdom of priests is in view. Sanctification is more than Spiritual disciplines- it is practical, physical, vital, daily, anoverpowering engagement and effective stewardship of life on this earth for Christ's sake. I am not sure many Christian educators understand this, they take for granted that the students they encounter must be believers in the first place. We must be about building culture warriors and wise stewards of vocation, but the foundation for such a pursuit must be the correct estimation preeminent place of the Glorious One in our living, moving, being.
Posted by Anthony at 10:48 AM No comments:

Day by Day on Vacation

Day One-Saturday we drove to Summerville, SC. We toured the town looking at the shops and the azalea gardens. We missed the blooming but it was still lovely. 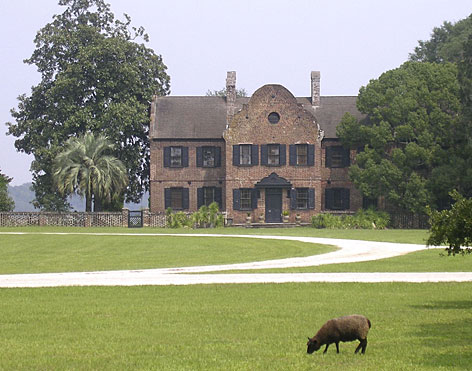 Day Two:We attended Summerville Baptist on Sunday morning. Most of the staff there is from SBTS. From there we toured the old Middleton Plantation by carriage and by foot. We journeyed on to Patriot’s Point and Mt. Pleasant that afternoon. We had the best meal of our week at The Water’s Edge in Mt. Pleasant.

. There we watched the porpoi – or maybe they were dolphins--play and the parade of dogs steeling themselves like hood ornaments on the front of the passing pleasure boats. I had what I would consider the best flounder i ever ate and the service and atmosphere was almost as good...

Day Three: Monday morning we toured the Yorktown, the Medal of Honor museum, and ferried out to Fort Sumter. Lunch was at the Okra Grill where everyone had a down home meal. Then on to the Hilton for the conference.

The conference started at 6 PM with David Jeremiah teaching from the book of James. The teaching for the entire conference seems to be taken from one of his books, Turning Toward Integrity.

The ministry’s old website is changing- it is becoming DavidJeremiah.org due to the proliferation of like sounding sites- people were getting confused as to whether they were on the right site or not.

Day Four: Tuesday morning was another session from James, followed by a short concert by David Phelps, who was looking a bit shaggy...

He has a gifted voice, but I think he needs to go back and work with Bill Gaither on his deportment and especially his interaction with the audience. He didn’t even introduce the talented pianist and accompanist with him. This was especially notable since all the other artists- especially Mark Lowry- bent over backwards to recognize their backups.

We then went into Charleston and ate at Hyman’s Seafood. Compared to the Water’s Edge, the food was not as good. Then we took a carriage tour of Old Charleston, which was great.

Mark Lowry was on the bill for the evening and though I have not followed his career, it was nice to laugh so hard.

Day Five: On day three of the conference Dr. Jeremiah taught from James 5. It was a very good message on patience- waiting and the grip a culture of speed has on us as Christians.

Babbie Mason was in concert that evening.

Day Six: Day 4 of the conference we heard another message from James 5. We adjourned for home and returned to Summerville to enjoy the shops and flora.

Jerry and I saw Iron Man in the evening- (can you say "Tony Snark"?) and determined we had to have another movie weekend together sometime in the next few months.

Day Seven: We journeyed home on Friday stopping to eat and shop a bit- Strawberries and the Ky. Artisan’s Shop in Berea were the order of the day.
Posted by Anthony at 1:13 PM No comments: