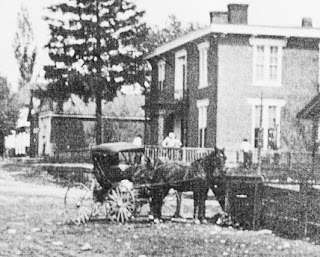 The Bullitt County News April 19, 1907 Children’s Corner
A Little Trip.
A few days ago I had occasion to go to Mt. Washington, so early one morning I hitched up old Prince to the buggy and started. I will first tell you where I live so you may have some idea of my route. I live on the South side of Salt river, six miles east of Shepherdsville. The river was deep and the ford difficult, so that I had to go by the bridge at Shepherdsville. If you will go with me I will write in the plural and say we, as I do not like too many I’s, especially big I’s. After passing over a little rough road near our house we came out onto the county road leading from Shepherdsville to Greenwell’s ford. One of the first places we passed was Pate Swearingen’s. He owns and occupies his father’s old place. Following the decline in the road we came to James Ash’s; he is a blacksmith and runs a shop. Going on down the creek we crossed at a place commonly called Hecker’s ford. Up the hill a short distance we came to Ed Weller’s cottage home. Looking across the valley to the east we saw George Kulmer’s pretty home. Farther on we saw W. C. Parris’, an aged and respectable citizen who has raised a large family of boys. Going down the hill from there we came to the south branch of Cedar Creek, which we followed half a mile, where we came to Lick Skillett where Port Thompson keeps a dry goods and grocery store. Mr. Asa Davis also lives at the Skillett and his wife keeps the telephone exchange at that place. We do not think that place should be called “Lick Skillett,” for the people there are a thrifty people and do not lick the skillet, especially when it is hot. We next came to John Bolton’s saw mill where there were great piles of lumber; then we came to J. E. McGruder’s nice home with his clean country store in one corner of the yard. Farther down the pike is W. M. Combs’, he keeps a fruit nursery and raises fine stock. In a beech grove near the road is Glenn Ellis, where they also have church and Sunday School. Then we come to the Lee mansion where Mrs. Hamilton lives. Looking northward from where we saw Mr. Pope’s fertile fields and his splendid home in the distance. The hazy distance rendered it doubly beautiful. Next we came to Wm. Simmons’ fine stock farm where a number of young horses and mules were playing in the pastures. We then came to Buffalo run, a small creek which took its name in the early times from the numbers of buffalo and other wild animals that roamed over its rich valleys. Next was George Maraman’s new and beautiful home; who also occupies his father’s old homestead. We next came to Salt River Station, a thrifty, growing village on the South side of Salt river. From the station we followed a nice piece of rock and gravel road to the new bridge. On going out of the bridge on the north end a splendid view greets us in the shape of Main street, which forms a pretty avenue with its shade trees and fine buildings on each side. We followed Main street to the public square where we turned to the east and going through a rock walled culvert we found ourselves out on the open road to Mt. Washington. A short distance to the right was Paraquet Springs, but we had not time to stop there. Two miles on the road became rough, and going down a rocky place we came to Floyd’s Fork bridge, a nice new iron bridge painted red. The next two miles brought us to Tom Bridwell’s. He owns and occupies my old homestead. The house I planned and had built myself, and Messrs Quincy Bolton and John W. Whitledge done the carpenter work. We next came to Mr. Hardin James fish farm with its clear, deep ponds, where he raises German carp fish. We once went with Mr. James to see him feed his fish; he fed them on crumbled up biscuit bread; the pretty bright fish scrambled over their food like a gang of little pigs. A short distance brought us to Pleasant Grove school house, and near it is Pleasant Grove Baptist church, both new. Next was J. B. Proctor’s store. He is doing a thriving business. We stopped at John Lloyd’s for dinner and also at “aunt” Mag Stallings’ to deliver some carpet to be woven. One mile from there we came to a place known as the brick house, where Washington Simmons lives. Mr. Simmons is quite old, yet he has a vivid remembrance of early days, which he loves to talk over. Another half mile brought us to Bethel church (Methodist) a large handsome church capable of seating several hundred people. We must speak of Dr. Moore, an aged and respectable physician so well known in this and other counties. On arriving at Mt. Washington Mr. Ed Showalter’s children came out to talk with us; we are always glad to see them. We traded some at the store then went to W. A. King’s and stayed all night. Next day Paul Jones came home with us. We returned by the same route and got home about two o’clock in the evening.
C. W. R.
Posted by Anthony at 9:58 PM