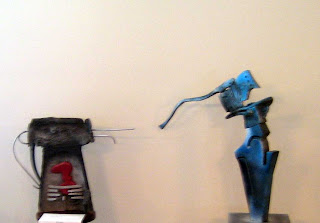 ShepherdsFest was a big success this year. I initially expressed interest because I always like to support anything that I can come alongside related to Christians taking responsibility in the arts. I ended up actually exhibiting a number a pieces, from drawings to midsize sculptures (see two of them here). For its second year, it was well attended- I would guestimate 5000 people by midday. Not bad for an unseasonably warm weekend. I posted a mini-video on the Facebook site as well.
Posted by Anthony at 10:12 AM No comments: 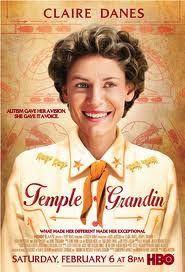 I bought this video on the recommendation of a friend. When I was checking out at Borders the sales clerk gushed over the movie.

A remarkable story of human intervention on par with The Miracle Worker. This is the story of an autistic child and the power of intentionality in bringing light to darkness. Rather than give up and heed the advice of experts a mother perseveresthrough the pain of pushing her child to reach what might otherwise be unimaginable goals. This is a great biopic- fascinating to the end- that reveals the details of the thought processes of the person it renders on the screen. It is filled with unexpected, but unsentimental emotional power.

Part of the power is the peeling of the onion that occurs as we are dropped into a life to encounter explanations and circumstances in situ.

It is also touchingly human to follow Temple’s development through challenges at every turn. She see the challenges as doors to go through to emerge on the other side. We can all learn and be inspired by her tenacity in the face of opposition and ignorance. The mother's role cannot be underestimated in this process. We hear her demand respect for her child who is "different, but not less." Indeed, Temple seems to have savant capabilities in visual thinking which she is able to leverage to compensate for her extreme dysfunction in verbal and social ability.

It is also a testimony to the power of teachers to provide a platform for transcendence to their pupils. In the case of Temple, her science teacher saw with sage eyes the potential of his very special student- “trust me, we know how special she is”. And this depiction of the power of deferring presuppositions is inspiring as well.

And yes, I was completely choked up by the celebratory ending, which also testifies to the profound worth of the film.
Posted by Anthony at 9:03 PM No comments:

How I dood it.

Some of you have asked how I went about losing weight. I just got the most important news: my bloodwork came back and I nearly lowered my blood sugar to under 105- it is now 109 down from 155 in three months. Everything else is within acceptable range for the first time in probably 20 years.

For those who are asking how I did it, it was mainly the old fashioned way- caloric intake and output maintenance. I had a mixture of strategies, but key things were getting the Eat This Not That books (all of them) to help with grocery shopping and with eating out because we loves us our restaurants. Rocco Dispirito has a great cookbook called Now Eat This- both of these approaches give low calorie, good tasting alternatives that are reasonable and available. Also checking out the online calorie count sites for things at other restaurants.

Walking 1-2 miles on the treadmill at least 5 times a week is important to get the muscles toned. In the next phase I will have other exercises, but walking was all I did for the first 35 pounds.I didn't totally eliminate anything so I didn't obsess on not having sugar, fat, etc. I eat light 6 times a day- with 3 meals around 3-400 calories and 3 snacks not exceeding 300 calories total so I have not been hungry ONCE in the three months.But I am learning to count to 1500 calories in a general way without getting obsessive with it. It's more of an average of 1500 with some days 1800 and some days 1200.

God bless Splenda. There are many alternatives from Hershey's chocolate to ice cream to cookies to pickles to fruit cocktail sweetened with Splenda now. A banana and 2 Snackwell cookies is a great treat under 200 calories. Once in a while a McDonald's ice cream which is under 200 calories. Severely limit empty calories like Cokes. I still have Diet Dr. Pepper and Diet A&W occasionally but have even limited "diet foods" that are highly processed- they seem to make me retain fluids which is a killer at the weigh ins.

I weigh in a couple of times a week early in the morning and CHART it. That way I can make corrections, which has been the case several times. I always figure there is at least a 1 percent fluctuation to expect any given day in weight, so for me that means plus or minus 2.5 pounds. I don't worry if it's within that range when weighing at odd times. After a month the stomach shrinks to its intended size- about the size of your fist- and then it hurts to eat more than that.

Smaller plates help. Also only eating HALF of most anything I get at a restaurant- and the other half gets to be lunch the next day for either Earnie or myself. Grilled chicken and fish have been a staple. BUT another huge help from the Don't Eat This books has been the discovery of Chili's Old Timer Hamburger on a wheat bun with a side salad and lowfat honey mustard dressing for under 600 calories. This is my red meat fix as I don't like steak, which is also lowfat. The difference in a wheat versus white bun is incredible. Mustard and ketchup and dill pickles/peppers/onions are freebies.

Oscar Mayer thin sliced Turkey and Ham with 45 calories a serving (6 slices!) on 35 calorie veggie fiber bread has become a staple at lunch along with fresh tomatoes and baby spinach salads. Bob Evans veggie Omelet with fruit. There are several low calorie dressings out there by Vermont Farms that actually taste better than the high fat alternatives. Something hard to find locally is Marzatti's low fat honey mustard dressing. They have this at Cracker Barrell, but I had to load up on some when we were visiting friends in St. Louis last time as I cannot find it in the stores here. It's just about the only thing-salad with Marzatti's- I can eat at Cracker Barrell anymore- they won't even put calorie counts online because they load stuff with hidden fat and salt. Whole wheat, whole grain, fresh unprocessed stuff,are the ticket... very few potatoes and rice go into my mouth these days.

Drink plenty of water and go light if at all with the salt shaker, which causes fluid retention. I can gain weight eating very lowfat pretzels because of the salt..and I discovered Lays new light potato chips (75 calories a serving) that taste like the real thing, so there's another treat once in a while. But watch the salt there too.
Posted by Anthony at 2:34 PM No comments: