Read more about why I am backing off on Facebook posts...
Posted by Anthony at 10:35 AM No comments:

ONCE TO EVERY MAN AND NATION

While gathering my tax information I ran across a transcription I did some time ago of an article written by one of my G-G-Grandfather's pupils who became a teacher. It ends with a line or two that garnered my attention and upon searching I found it was a portion from a hymn.

Once to every man and nation, comes the moment to decide,
In the strife of truth with falsehood, for the good or evil side;
Some great cause, some great decision, offering each the bloom or blight,
And the choice goes by forever, ’twixt that darkness and that light.

Then to side with truth is noble, when we share her wretched crust,
Ere her cause bring fame and profit, and ’tis prosperous to be just;
Then it is the brave man chooses while the coward stands aside,
Till the multitude make virtue of the faith they had denied.

By the light of burning martyrs, Christ, Thy bleeding feet we track,
Toiling up new Calv’ries ever with the cross that turns not back;
New occasions teach new duties, time makes ancient good uncouth,
They must upward still and onward, who would keep abreast of truth.

The reason I am posting it is because I am pondering on the syncretistic sentiments that can slip in and pollute an otherwise good work- there is a sense in which each line rings true- but we must ponder the meaning of whether "time makes ancient good uncouth"- in what way and context? I also decry the sentiment that God is watching from on high-- that is true in one sense but by the implication God is at a distance--not sharing in the midst of the shadow with us. Such is the stuff that has brought us where we are today.
Posted by Anthony at 11:37 AM No comments: 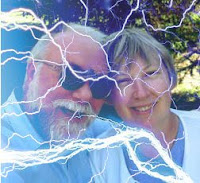 I walked across the carpet just a while ago to give Earnie her Valentine's Day card, then she stated to plant a smooch on me and a spark arced from her lips to mine popping loudly. After the initial shock wore off (literally) we figured it's all part of making memories. Hope you and your love do as well!
Posted by Anthony at 8:19 PM No comments:

WHY GOD MADE MOMS


Answers given by 2nd grade school children to the following questions:Why did God make mothers?
http://www.associatedcontent.comarticle/1459741/why_god_made_moms.html
Posted by Anthony at 12:37 PM No comments:

How do we serve the interests of the Student?

I’ve often said that whomever owns the definitions drives the debate. The content and standards of the design are based on what is required by the canon. It is the methodologies that should change to accommodate the needs of the students and the learning environment. The doctrine of self realization as it comes to us from the world is actually a doctrine of autonomy which is foreign to the Christian worldview.

I don't think this really has to do with age. Even the developmentally mature adult student should not be the definer of the content in the curriculum. They certainly have the choice of schools and therefore different approaches to curriculum, but we must offer up only what our purpose defines as the course to run. Now in general let me say that the issue boils down to what it means to be a servant leader in the educational milieu. It does not mean that we serve up what the students ask for, as this might be their ruination.

Failure to exercise proper authority is a big problem in leadership, and more difficulties arise from the lack of people taking responsibility than from an excessive desire to assume responsibility. I believe much of the problem with higher eduication in general is related to this lack of a stand on the notion that there is a canon. When I first became an ID (Instructional Designer) the first charge I had was that the organization was going to move from being a teacher centered enterprise to a learner centered enterprise. I made sure that I had the ability to define this as relating specifically to adjustments in pedagogy and methodologies related to teaching the curriculum. I wouldn't have taken the job otherwise. Then decisions about methodology were based on critically appropriated research about how people learn. But this did not mean we changed the standards for what was required for students to pass competency exams in their particular disciplines so the content became more "interesting". The changes in metholdology attained for that purpose.

So the REAL interests are we should be serving includes those of the students, whether they are aware of it or not. But not by catering to felt need or even preferences per se, and certainly not in an effort to allow students to construct their own reality. New technologies and pedagogies should enagage students by necessity but for what their real needs are. The curriculum must be designed to insure this.

Posted by Anthony at 3:24 PM No comments:

New data from a recent study on how Americans perceive spiritual gifts.
Posted by Anthony at 3:22 PM No comments:

The list of "old sayings" has taken over our home- We've created a monster (SEE WHAT I MEAN)- we are on our way to more sayings than you can shake a stick at AND THEY KEEP COMING like nobody's business! Head for the hills!
You can check them out here.
Posted by Anthony at 3:36 PM No comments: