We are back from a mini- trip that included a night in Augusta KY at a B&B (see the ferrycam for the view), a visit to historical sites at Limestone (Maysville) KY, including the Gateway Museum, Paris KY, the Kentucky Horse Park, The Cane Ridge Meeting House and a stopover in Frankfort. We are off to the Apple Harvest Festival at Shakertown in the morning and hope to make it to the Kentucky History Center on the way home.
Posted by Anthony at 8:25 PM No comments:

Posted by Anthony at 8:25 PM No comments: 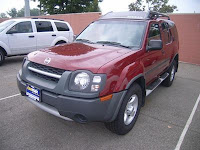 We have been contemplating a new (for us) vehicle, and today we followed up on our fairly in-depth research, settling on a Nissan X-Terra with low miles (38K). It's not that I could no longer stand not having a car payment, but the 1996 Sable was going to require more repairs that the car was literally worth according to Blue Book.

So now we are climbing up into the seat rather than needing a lift ramp to get out of one. I like the responsive 6 cylinder and the quiet ride. I especially liked the fact that CarMax lived up to its reputation of no hassle and no haggling.
Posted by Anthony at 11:15 PM No comments:

Went to Actor Theater last night for the first of our subscription series of plays. This one was 43 Plays for 43 Presidents. It was a very lively, and entertaining, if a bit dark in places, series of 43 two minute plays based on the lives of our presidents.

The troupe was very talented and versatile, as five actors covered all the roles. At the end of the final performance the audience got to choose the 44th president and the troupe proceeded based on audience feedback. Obama was the overwhelming choice- a few couples, us included, failed to generate enough noise to compete. We are in high hopes that the general populace will render up some more boisterous support for McCain! Unfortuneatly, in these times, much ado about nothing makes all the difference.

Earnie and I gave the play two thumbs up.

Dinner, on the other hand was a tragic mistake.

Joe's Crab Shack lost its flagship restaurant and corporate offices to Ike, but I don't think that was the problem. We were told only one computer was working and that paying the bill would be slow, but as it turned out that was one of the few things that actually worked well.

It took the waitress four tries to get the order to us correctly, then the appetizer came out with the main course. The potatoes were soggy and the fish akin to Long John Silvers' quality. The waitress was unapologetic and snarky. Maybe a few adults could straighten the formerly good restaurant out.
Posted by Anthony at 10:47 AM No comments:

We made it Home

I had to travel to Indianapolis Sunday for a meeting and got out just as IKE was rolling in. We saw a large exit sign in the middle of I-65 Southbound in Louisville, a tree across the southbound lane north of Sellersburg and encountered a downed powerline across the Interstate as well. Indy was not hit as hard as was forecast, at least from what we saw.

On the return trip we saw lots of damage in southern Indiana, and went about fifty miles in search of restroom facilities...either no water or power outages everywhere we tried along the way. We rolled into home about 8 PM and were glad to find no damage to our home. One neighbor lost a row of about half a dozen mature pear trees broken off at about 2 feet above the ground...
Posted by Anthony at 9:32 PM No comments: