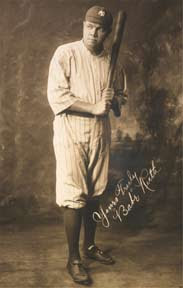 My Great grand uncle was the headmaster of the Baltimore orphanage/school where George Herman Ruth grew up. That is where he learned to play ball. Brother Pius was in charge there for many years, and was later affiliated with St. Joseph's Academy in Bardstown. My grandfather was named for him.
Posted by Anthony at 10:06 AM