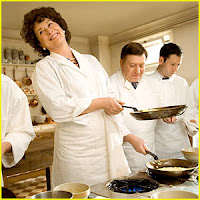 You ask, how is this possible?

This is not really a review of the movie we just saw tonight. It is more a commentary on the state of the art form that has shaped the American consciousness like none other.

So there are no spoilers here. I am not sure what would even constitute a spoiler in the present case, and that says it all. I think Merle Streep is one of the great actresses of all time and certainly the best of this day. Merle Streep is fascinatingly entertaining and touching as Julia Child, and contrary to what I have read in some reviews, the double adaptation of two books in one movie works for the most part. It was good entertainment and a nice distraction.

The problem as I see it is that with Streep, the material rarely rises to the level of the actress. She saves every movie she is in and gives it value it would not otherwise have. What I was struck with was the same feeling I had recently when watching a month of 1930's movies on TCM. I remember John Barrymore for his superb acting, but his movies are, for the most part, forgettable, I think. We have many good movies today but very few great ones that will stand the test of time.

I'm not so sure that any of the movies in Streep's long career will ever rise to the greatness she commands as an actress. Nora Ephron is no slouch, but the power of the narrative of this adaptation left me considering the storyline as negligible. In some ways a biopic would have been more engaging as the movie stops short of her foray into TV history except for Julie's rerun watching. It would have been nice to see more of how Julia Child transitioned into one of the most unusual television personalities of the day, as well as her husband's role in this.

And now a word on the state of the art of cinema.

Earnie and I were conversing about the gulf between the great storytellers of 1939 versus the scene seventy years later. I do not think the art form has advanced in any way from that day so long ago. Special effects and the postmodern realism so evident in today's fare has yielded a degradation of the promise of cinema by wringing the humanity out of it by devaluing symbolism and archetypal characters for blatant realism. Meatgrinders replace metaphor and the f-word replaces prose.

What was so noteworthy, time and again in watching so many classic four star movies on TCM in July 2009 was the fact that this great age of entertainment was exacted during a time of great suffering in our country.
Posted by Anthony at 10:12 PM

I enjoyed reading your blog. I just saw the Streep film, "Doubt," the other day and felt the sole purpose of the film was to showcase acting and actors. The movie was not that spectacular.