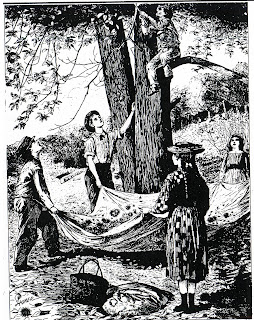 The Bullitt County News  December 17, 1909 The Children’s Corner
The Apple Hole and the Watermelon Patch CWR
An apple is as sweet as candy to a boy in the summer months, and the taste for it does not diminish during the winter months. In fact the memory of the juicy fruit on a hot day of stacking haycocks may make them all the more to be missed for that sensation is forever linked in memory with warm and bright days. An apple is full of sunshine. The sound of the dropping of apples from the apple boughs made for a willing worker when it came to string up a winter stock of the fruit. We had an old root cellar in which we stored apples in the autumn months, and an apple-hole in the back yard later as the first hints of winter approached with jack frost in attendance. The apple harvest time demanded as much time as sugar making. In mid October days we would fill bushel baskets and gunny sacks and stack them on the wagon, our orchard never lacked for produce, and in the late days of the harvest some apples were put in the apple hole for storage. We picked them direct from the boughs and never let them hit the ground, for an unbruised fruit will keep better. I learned early that a boy will bruise as readily as an apple if he falls from the apple tree while picking apples. Our apple hole was used year after year and was cleaned out in the spring like a bob-olink cleans its nest. There is a art to making an apple- hole. First the pit must be dug, a shallow hole about a foot to a cubit in depth and perhaps six feet in diameter. The hole was dug on the north side of the barn as the north side got colder and made for better storage in the winters months. Our apple hole was between the barn and the sapbush, not far from the orchard. Then the pit was lined with the last straw of the season to a depth of about six inches to serve as insulation and bedding for the apples. Then we would dump in as many apples as we could make a mound of and not see them roll off the pile. Winesaps and Pippens and Sheep‘s Nose and Democrats and Russetts and Crow’s egg apples all found a place in the apple-hole at one time or another. Covering them about with more straw and dried grass, we made a nice thick covering which we then covered over with the dirt we had first excavated to form the shallow. At last, an overcoat of dried manure was added to await the final covering of winter snows. This makes an efficient protection from the frosts under which the fruit can sleep and mellow during the silent darkness of the winter months. As the cellars were emptied during the winter months, the apple hole would yield up its bounty! The longer you stored the apples, the more flavorful and juicy they became. I do declare, when the snow is still on the ground in a cold February evening, there is nothing that tastes so good as a cold crisp apple from the apple- hole. It was quite a treat to go out and dig four or five apples which Mama would use to make an apple pie. Continued next week
Posted by Anthony at 12:19 PM