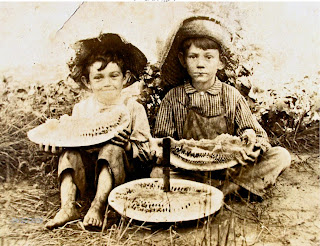 The Bullitt County News   December 24, 1909
Continued from last week. The Children’s Corner-
The Watermelon Patch
In the summer another delicacy was in order- Our watermelon patch was kept safe from coyotes and deer by a fence that seemed to a young boy to be as tall as a barn. Let me say without hesitation that there are few things that taste better than a cold sweet watermelon on a hot day, especially after haying or threshing in the field. We would sometimes chill a nice ripe melon in the creek or the spring by placing it in a shallow location early in the morning before starting in on our labors. Once I was sent to fetch the cold melon after a day of haying. The melon of choice was more than my ten year old arms could manage, and as I approached the haystack I dropped it and it burst open. I was embarrassed as Uncle and Papa laughed but they told me not to fret as it saved them cutting it open with their hatchets or pocket knives. That was the most delicious watermelon I ever tasted, and it was the sweeter for eating it with my family. We would sit with legs crossed and spit the seeds as far as we could while holding onto the rind with both hands. If the juice dribbled on our feet, no matter, that was just an excuse to take a plunge in the pond, as we would not be any wetter than we already were from the summer sweat that drenched us. We had a special patch that was grown from seeds that were given Papa by one of the preachers who frequently came to stay at our house. He called them his Vardiman melons. Papa saved those seed from year to year as they were some of the choicest melons we ever grew. I recall the pride with which papa gave those melons to neighbors. We learned to tiptoe about the vines so as not to step on them and how to tell the ripest one by thumping them. We never had to cut a plug to find the choicest melon. We would then take out our pocket knife and cut it oblong in half while our mouths watered for the ripe red center that was warmed by the sun. As we bit into the melon, its sweet juice would trickle down our chins and make trails in the dust on our legs. When we tired of the spitting competition we would deposit the seeds between our crossed legs as I recall we believed papa when he joked that a watermelon would sprout in our bellies, if we swallowed the seeds. We also made watermelon syrup and pickled rinds. We usually made some watermelon juice the night before syrup making day. Mama poured the juice into a trough and brought it to a rolling boil we children scraped the watermelon flesh and ground it in a sausage grinder. The rind we put aside for pickling, and we separated out the seeds for drying for next year’s crop. Then we put the watermelon pulp into a gunny sack and pressed it with a stone until all the juice was extracted,. This juice was added to the juice in the trough. The fire had to be kept well regulated, for if it got too hot, the juice boiled over. The froth had to be constantly skimmed as well. It generally takes about seven quarts of juice to make a quart of good thick syrup. All day long, we scraped and chunked, pulped and juiced and cooked the syrup, adding more juice as the syrup condensed, skimming the foam off the top, and constantly stirring it up. During the last few hours of the long hot process, no more juice was added, so the syrup would be nice and thickened. The syrup can also be reduced to a cake that is as sweet as maple sugar when eaten! When pouring the syrup into bottles, we were sure to leave the sediment that settled out into the bottom of the pot. Oh how I remember the taste of watermelon syrup eaten with biscuit or with applesauce cake! It is a wonder we had any teeth left in our heads it was so sweet! I must close now due to the dictates of space but will write to the children next of my memories of my early schooling and my early days of teaching in the county. CWR December 24, 1909
NOTE: This seems to have been the last in the series of writings for the children. There are many other entries related to the Old Folks Meetings written by CWR.
Posted by Anthony at 4:31 PM