Children and Their Ways, continued 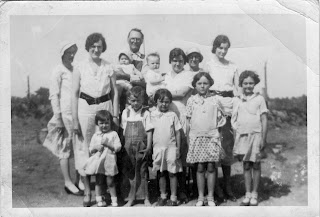 I am running out of pictures of GGGrandpa Charlie, but here is a photo of some of his offspring...taken around 1931-32, the year my Dad was born. On the left is my Grandma Alma - Grandpa Charlie's son Grandpa J. O. Ridgway is holding her oldest, my Aunt Bertha. the short lady is GGrandma Mattie.

One time when James Simmons and Ernest were little boys, Kirby Simmons came home one evening and Ernest was standing around the yard looking sneaking, Kirby said “what is the matter?” and at the same time said “where is James?” Ernest said, “He is upstairs lying down, he don’t feel good.” Kirby said, “What is the matter with him?” Ernest said, “We were playing on the hillside rolling one another in a barrel and the barrel got away from me and rolled down the hill with him in it and he has not been feeling good since.” Kirby laughed a little out of the corner of his mouth and said, “Well you make haste and do up the evening work.” It seems a little funny that that should ever have happened, for they are both men now and James is married and Ernest wants to marry. I will tell that where the girls will hear it. But that was the last time they rolled each other in a barrel; that broke up the barrel business. A mother wanted to appear good and asked the preacher to return thanks at the table, a little boy, standing at the back of her chair, looking on in surprise said,” Mamma, please get him to say that again.” Children will sometimes betray their parents. Manners plays a big part in child life as the following little incident will show. On one occasion during the Bullitt County Fair, two ladies had driven some distance over a dusty road, and on arriving at Shepherdsville walked in one of the modern stores and asked for the mirror and a dust brush, and having bought a box of whitening proceeded to prepare for the Fair, when a lad came to their relief and applied the dust brush and helped them in various ways, and when everything was in order, he said admiringly, “Now you ladies look nice enough to get married today” and walking away, left them, when one of the ladies said, “Isn’t he nice?” the other said, “Yes he is as cute as he can be.” But about this time another boy came along and stared at the ladies who were getting ready to start, when one of the ladies said to the other, “do I need a little more starch on my face?” The impudent boy said: “you have enough on your face now to make a biscuit,” and grinned in their face and ran away. One of the ladies said “Isn’t he hateful?” and the other said, “yes he is a despicable little boy.” Why was one a despicable little boy and the other just as nice and cute as he could be? Boys you might think about that a little; there is a lesson in it. There are but few things that pay a better dividend on the investment than manners. Children should be polite to all, especially to old people. They should Mr. and Mrs. Those older than themselves. It is nice to hear children say, good morning, Mr. Jones, or good morning Mr. Joe, and not how are you , John? Or how are you Joe? and finish up with it. Every child should try and be an honor to his parents,, and every good parent should be an honor to his children. C. W. R.
Posted by Anthony at 10:28 AM